After meeting at Washington DC headquarters, the World Bank team expressed interest for a EO4SD FCS demonstration in Mosul in support to the Emergency Operation for Development in Iraq.

In a context with limitations in terms of ground-based supervision, the World Bank looked for alternative methods and an assessment of the relevance of earth observation products.

Three partners of the EO4SD FCS team, CLS, UNOSAT and GISBOX, combined their strengths to set up the service demonstration. Using very high resolution optical satellite images, the team analysed the evolution of the urban fabric in Mosul through 3 different lines of service:

LULC information describes the physical coverage on the ground and its use, it contains a spatial description on how land cover types are arranged, and what patterns lead to a certain land type being produced, changed or maintained. The comparison of several LULC products representing different years will provide insights on how and to what extent has the landscape evolved. 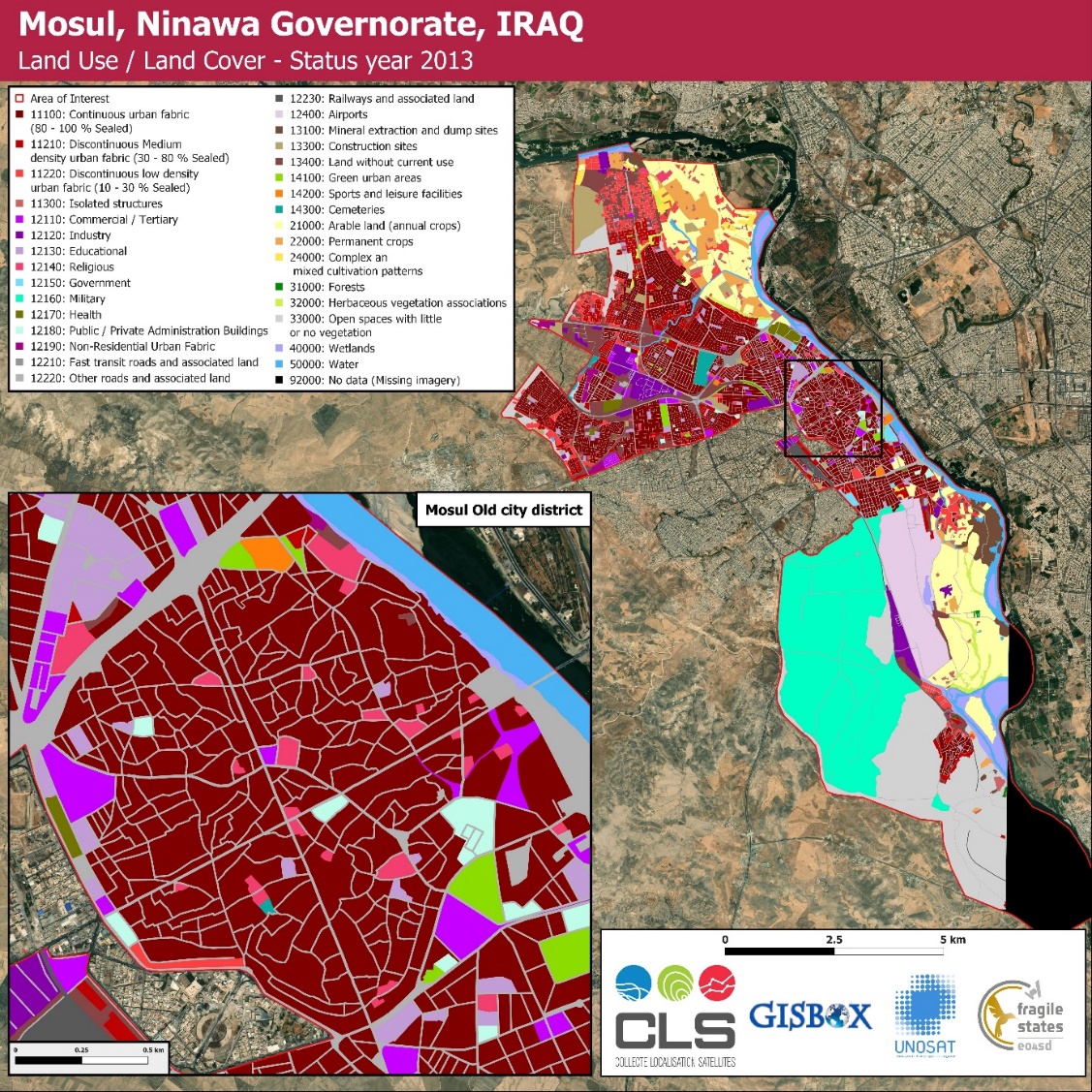 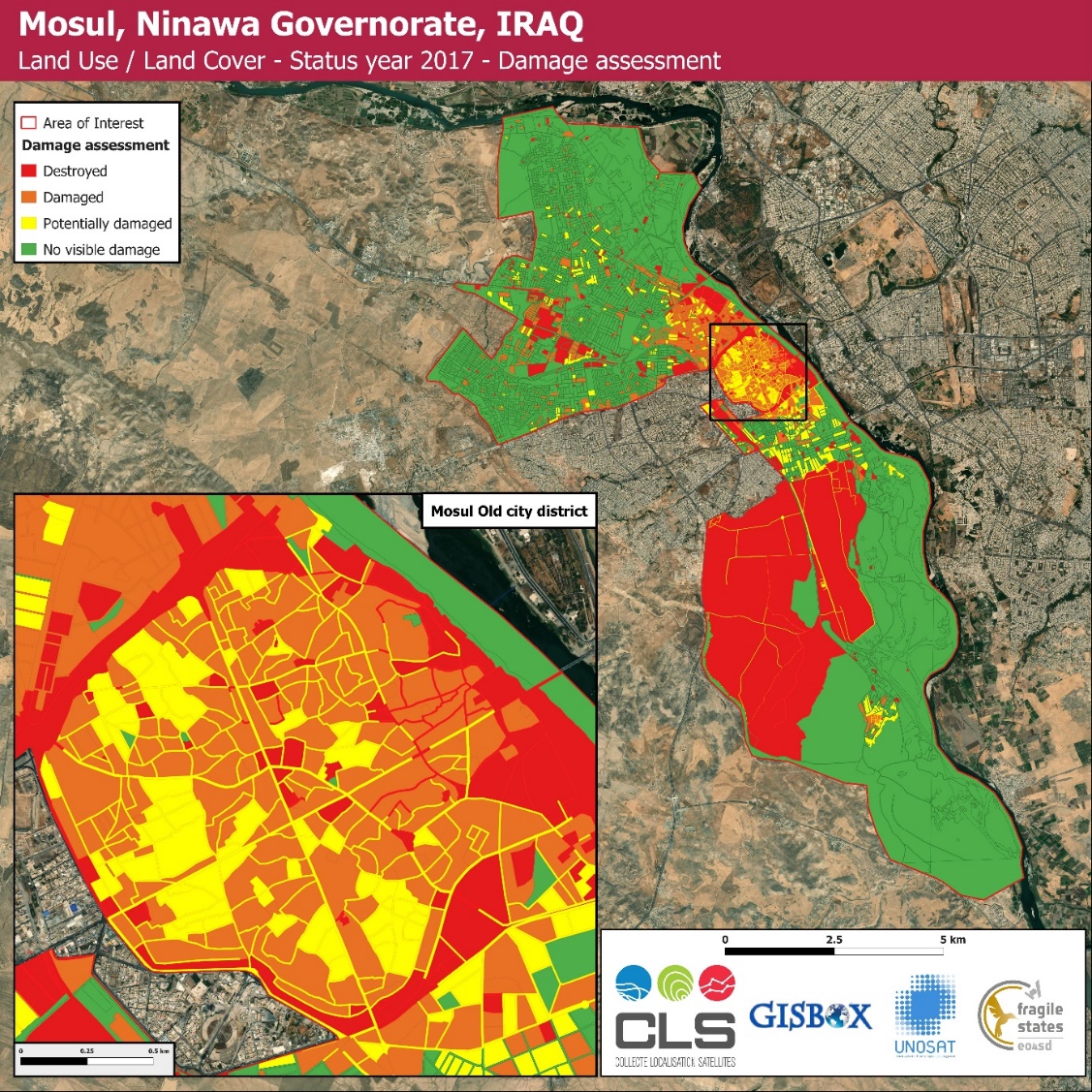 The western Mosul analysis was conducted within the standards of the European Urban Atlas, a reference LULC mapping product designed for urban areas which is part of Copernicus land monitoring services. It showed that in 2013 the city presents a very dense continuous urban fabric with on its outskirts only a few discontinuous urban fabric and natural or agricultural areas. In 2017, the city suffered extensive damages: the old city district is devastated, and many strategic industrial and governmental structures have been destroyed or seriously damaged.

Reconstruction efforts were monitored from 2017 to 2020, with a yearly analysis updating the original damage assessment mapping from UNOSAT in 2017. The status of each individual building identified as damaged by the conflict was re-examined on every year, and all new constructions inventoried. Cleared and rubbles-free areas were also identified for potential future developments.

Results highlight the massive ongoing efforts for rebuilding Mosul, at different levels. In 2020, out of almost 17,000 buildings inventoried, only 7,000 showed no signs of evolution, 2,000 were cleared or dismantled, and 7,900 repaired or new. 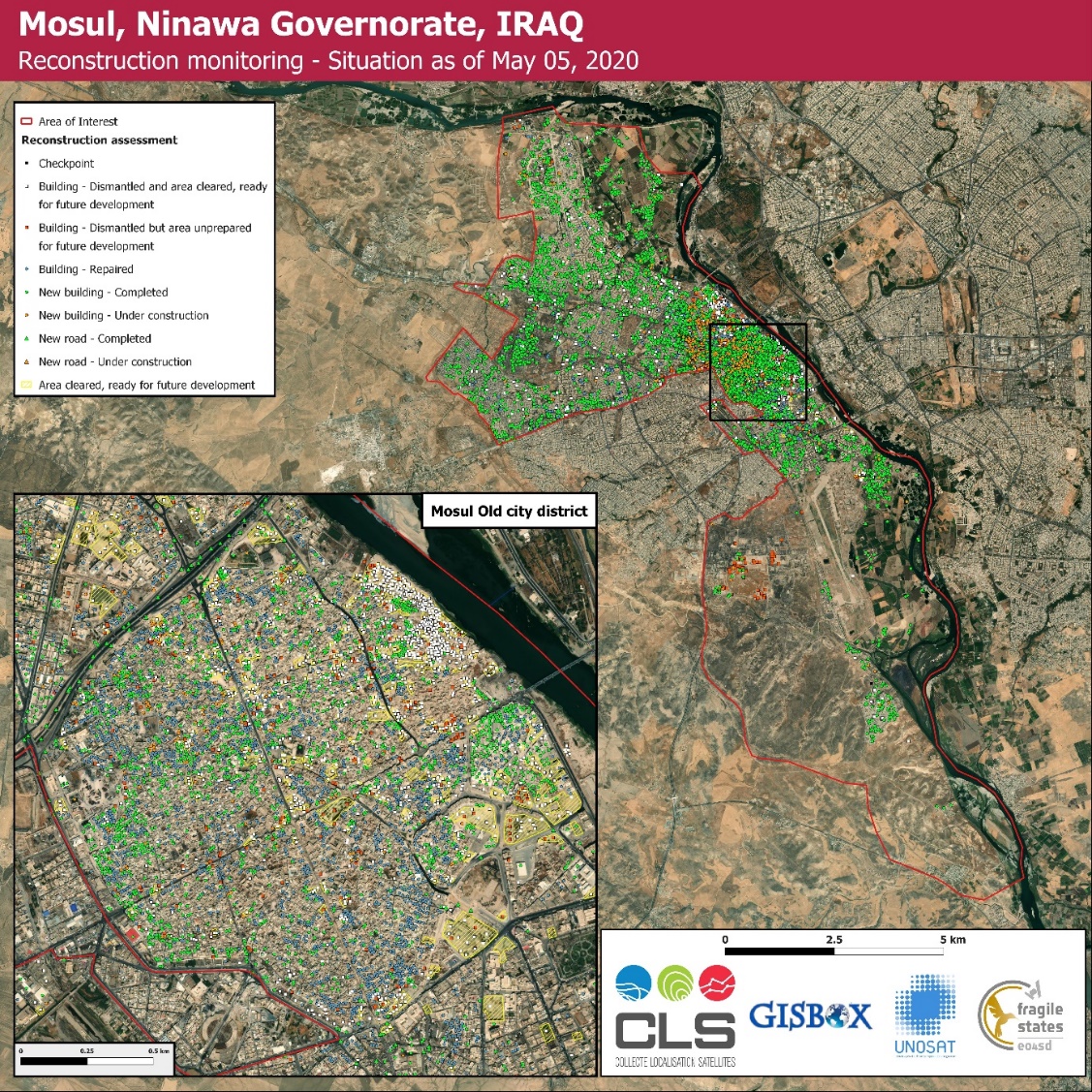 Most buildings reconstructed are located in former high density urban fabric areas. The old city district that was the most affected also profited from intense efforts to rebuild, especially in the market area. About 40% of new constructions took place in less dense former urban fabric, or spaces that were dedicated in 2013 to tertiary activities.

All results were provided to the World Bank team that shared enthusiastic feedbacks: “It has been our great pleasure working with you and team this year on the EO4SD-Fragility initiative. The process has demonstrated significant potentials in using EO-based solutions for supervision and preparation of operations, reconstruction progress assessment, and damage assessment.”